Senior librarian - On leave until September 2020 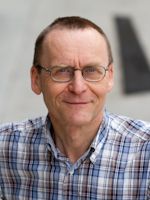 Other education and professional experience

Research fellow at the Department of Classics and Romance Languages, University of Oslo (1993-1999)