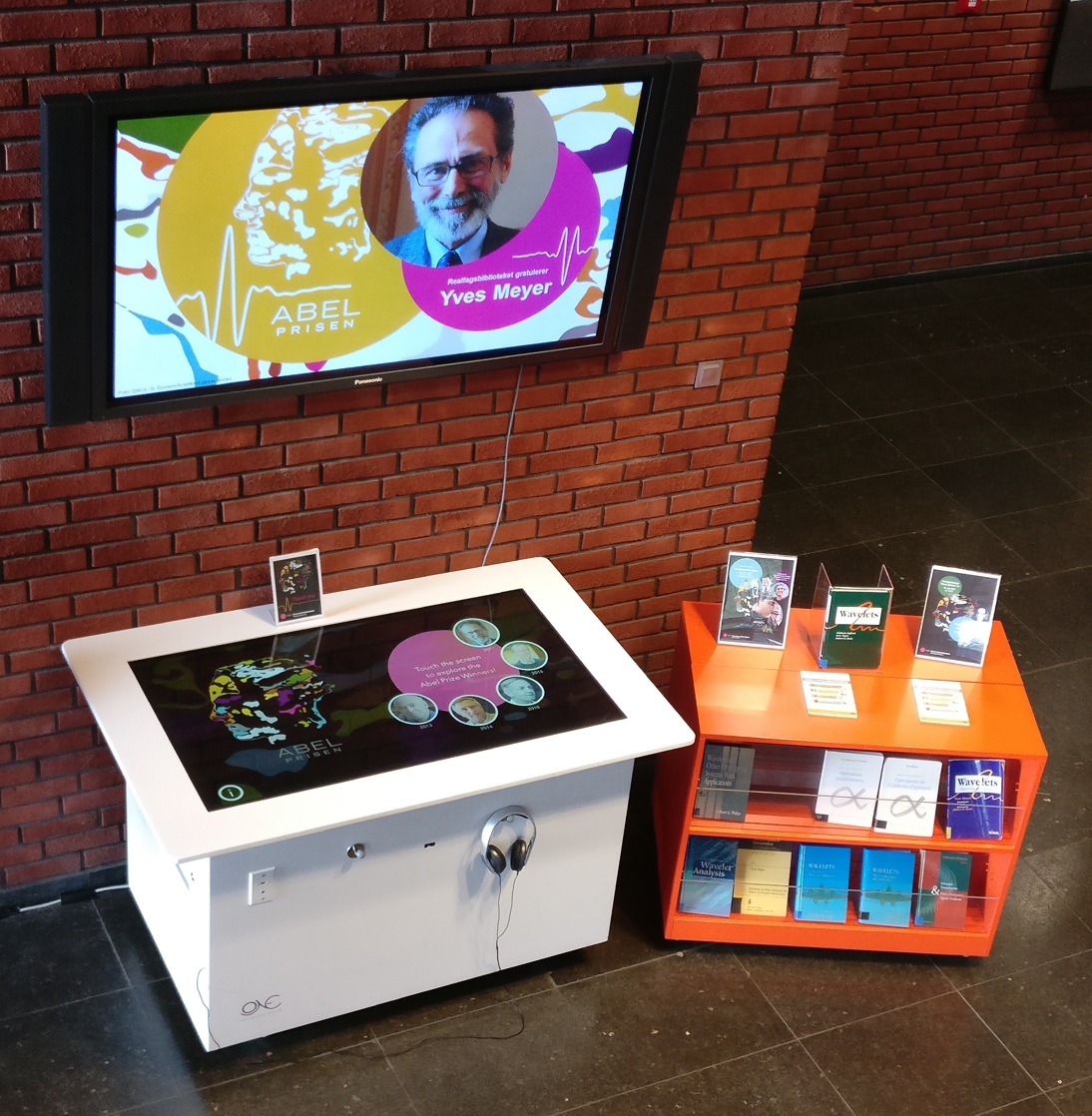 The Abel Prize is a prestigious prize awarded by the Norwegian Academy of Science and Letters for "outstanding scientific work in the field of mathematics". This prize, amounting to 6 million NOK (750,000) Euro, was awarded on May 23th, 2017 to French mathematician Yves Meyer.

A string of events took place in May at the University of Oslo Library, urging us to create a touch table application to provide context to this important prize.

The created Abel Prize application allows for exploring the Abel Prize winners of the last five years (2013-2017), for finding related articles, e-books and videos, and to find background information about the Abel Prize. This is all visualized via an animated touch-screen interface.

The Abel Prize application, like the earlier Hidden Figures application, took the open-source XIMPEL framework as its basis. Based on the experiences with our previous touch table applications, we created several extensions to the framework, adding for instance touch-screen 'swiping' support.

How often was the app used & at what time of the day?

The touch table was placed in the lobby of the Science Library for five weeks. In these five weeks, the application turned out to be quite popular, as it was used for 298 sessions. Our next step was to analyze how it was used exactly, for instance which content was frequently opened, based on captured anonymous statistics.

First of all, users viewed the information pages representing each year the most (966 times), followed by the e-books and articles (183 times) and YouTube videos (89 times).

We also looked at how the application was used throughout the day. As Figure 1 shows, most views occurred in the middle of the day, preceded by a gradual increase of views, and followed by a gradual decrease. Actually, most sessions took place between 15:00 and 16:00. This high number of views could be related to students leaving the library building, and potentially passing the table at that time.

How engaged were users with the e-books?

We then focused on the actual use of the e-books, i.e. do users actually read (parts of) the e-books and articles available on the touch table?

First, we looked at the general clicks on e-books and articles. As it turned out, a short nature article about Meyer's award in 2017 was most frequently read (27 times). In fact, 4 of the 5 most opened materials were about the latest Abel Prize award. Of course, just opening materials does not always mean engagement with the material, so we continued our investigation.

To get a better grasp of the depth of which the e-materials were read, we looked at the number of pages each user viewed in a session. This ranged greatly, from just 4 up to 62 viewed pages (12,6 pages on average). Next, we made a list of the books which users explored most deeply, with the following results:

Hence, we can observe that the materials with the highest engagement are actually specific books related to mathematics (including formulas and such). Since the contents of these books are not easy to grasp without background knowledge, this suggests that the users reading these books had knowledge of the topics.

In the design of the Abel Prize application, we took into account a number of lessons from the previous Hidden figures application. To speedup and simplify the design of the menu screens, we utilized Sketch, a digital design application. In terms of the interaction design, we simplified the navigation (now having one dedicated main menu which can be used to access all pages, and using a timeline approach). To further improve our future applications, we plan to analyze how much time people spent on different pages of the e-materials. For instance, we would like to find out which topics of the books are read more extensively, and which topics users just skim through.

It is possible to try out the Abel Prize application via this link. This version has been optimized for the Firefox and Chrome browser (Mac or Linux). If you are located at the University of Oslo campus, you can access the full application. Otherwise, you gain access to a version offering alternative content. Be sure to let us know your experience and ideas!