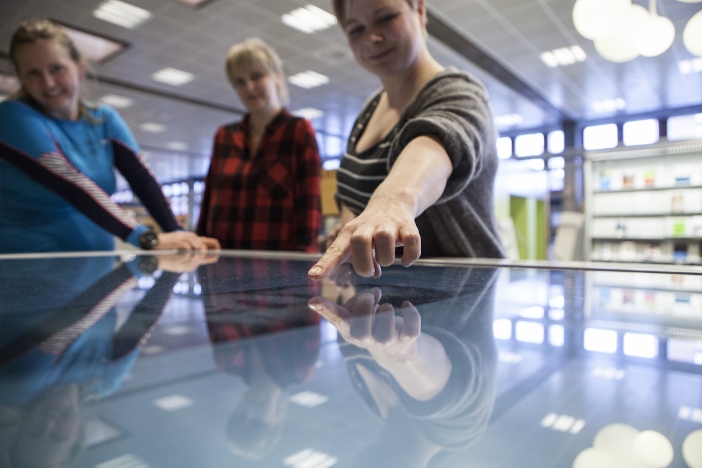 In a two-week project, we designed a touch table application to contextualize the Hidden Figures. This movie, based on the book with the same name, reveals the untold story of female afro-american mathematicians playing a pivotal role in the NASA space program. To contextualize a library exhibition about the movie, we created a touch table application, leading to additional insights into the design and use of such types of applications.

The application was developed using the “XIMPEL” framework, which allows for rapidly prototyping and creating interactive video applications, using XML-based “playlists”. We extended this framework, with the help of one of its founders, to include the possibility to embed custom content, and to register overall statistics of user interactions.

Fox Pictures kindly provided us with artwork and clips from the original movie, which we utilized in our design. As shown in Figure 1, the home screen of the application provides a dynamic perspective on the film. Users can select characters from the movie on the left-hand side, as well as movie clips and books on the right-hand side. For some of the books, an interactive book viewer is provided (Figure 2), which makes it possible to read the book via swiping the touchscreen (or via more traditional buttons). Finally, for each fictional and non-fictional character of the movie, it is possible to read a short biography, to access related movie scenes and to read related books (Figure 3).

The application was initially well received, and during the first two weeks there were more than 150 interaction moments with the application. Some of these interactions were by single users, but at times they also involved multiple users at the same time. The initial sessions with the touch table had a duration varying from 1 to 6 minutes, and the number of clicks within the application ranged from a single click to more than forty. The interactions have been further analyzed, and it is possible to read our detailed findings via the link below this article.

Also, during the design process and usability testing of the application, we observed that touch screens of this large size necessitate an alternate approach to interface design (e.g. due to the sheer size of the touch table, certain interface elements may be hard to reach).

Finally, during testing it turned out to be important to provide ways for users to easily save materials to their own devices, including laptops. In our case, we added a short bit.ly link to the download location of each e-book to the application. In the future, we plan to experiment with more “personal” approaches by making users able to scan their library card, and thus more easily receive needed materials to their university e-mail address.